The EMSHIP Programme Representative (2017-2019) at the Association for Students and Alumni of Erasmus Mundus Programmes(EMA) was
Mr Rajesh Madusudanan, EMSHIP, 7th Cohort (2016-2018) and after it is Mr TRIVEDI Ruturaj Radhakrishna, 8th Cohort

Lead Engineer - Aerodynamics at (The Netherlands) since October 2021

at DN&T in Liège (Belgium) since September 2020

Engineer at Cotecmar in Bogota (Colombia)

Member of the Board/ Project Manager at TuLiTec O (Estonia)

Steel construction engineer at ENKA (Russia) since May 2019

from Republic of Panama

PDEng candidate at University of Twente (The Netherlands)

CEO (Aeronautical and Naval engineer) at DITA in Medellin (Colombia)

from Bosnia and Herzegovina

R&D coordinator in the adaptation of Offshore Renewable Energies technologies to local conditions. at Energía Marina SpA in Santiago (Chile)

Engineer at Cotecmar in Cartagena (Colombia)

Marine surveyor at Bureau Veritas in Antwerp (Belgium) since Aug 2016

Naval Architect at Damen shipyards (The Netherlands) since May 2015

PDEng at University of Twente (The Netherlands)

Mechanical Engineer at Damen Shipyards in Gorinchem (The Netherlands)

Propulsion system engineer. at Piriou, a shipyard in Concarneau (France)

Studying master program in Business at in Berlin (Germany)

Graduate Teaching Assistant at University of Pittsburgh in Pittsburgh (USA)

Engineer at INNOSEA in Nantes (France)

PhD candidate at University of Oldenburg in Oldenburg (Germany)

at CMT in Hamburg (Germany)

Structural Engineer at VIRO in Rotherdam (Netherlands) since Not Known

PhD at University of Liege in Liege (Belgium) since May 2012

Loads and structure engineer at DNV-GL in Hamburg (Germany)

Engineer at Yamaha Motor Co., Ltd. (Japan) since Not Known

Project Engineer at Alveus/As2con in Rijeka (Croatia) since Dec. 2012

"The programme gives an insight into European maritime industry, its current challenges and goals. It was a pleasure to undertake various academic challenges, to travel, to get to know great people and to make friends around the world. The obtained degrees is an admission to EU labour market."

I would like to share an update about my status. As of today, I have started my PhD research at Memorial University of Newfoundland, in Canada. I will be focusing on ship hull optimization in terms of maneuverability using CFD. I was found eligible thanks to the strong CFD background that the master provided me with.

Thank you very much for your immense support during my master. And if there is any assistance required from my side regarding sharing my master experience at Emship weeks, I would be pleased to join.

As you would know, we the students of the 3rd cohort have completed our semester in Liege and are saying goodbye to Belgium for the time being.

I would like to take this opportunity to convey my gratitude to you for all your efforts, guidance and support throughout this semester. We have learnt a lot this semester and hopefully will continue to do so in the months and years ahead.

It has indeed been a memorable 5 months in Liege, memories of which will remain with all of us for a long time. We had the opportunity to meet a lot of new people and make new friends, and this I believe is because of the international nature of this course.

Once again thanking you and seeking your blessings for the next semester,

"I had the chance to choose my favorite study field and Internship, by this learning the European thinking, value, culture and experience!"

"I would like to thank you for giving me opportunity to study EMSHIP which has opened new career doors for me. I feel proud to be alumni of Emship.

The bureau Veritas has delivered me a work permit..... ;-)

"I had great chance to join EMShip on second cohort as delegate. It was entirely complementary program in terms of profession and friendship by linking people from all around the world under the great European universities."

I would like to thank you for the opportunity of studying EMShip, it has been a great experience not just academically but personally. Especially, I have enjoyed the way of learning, focusing on the physical principles rather than following rules in an automatic way.

The organisation has been really smooth and receiving always help from Ms. Christine Reynders.

"After EMSHIP, my company gave me much more responsibilities: now I am leading the production design of several vessels for the Colombian Navy!"

"EMship gave me the oportunity to broaden my aspirations in the engineering industry world wide. Also the cultural experience is no doubts very enriching"

"Courses and the Internship in reputable European maritime companies provide an excellent basis for challenging career perspectives after graduation!"

Within MERIC's program, developed in collaboration between Energía Marina SpA and the Universidad Austral de Valdivia, the professional must perform a technical/administrative coordination role linking the university's authorities with the company's executive direction and keeping a formal and daily information flow form Energía Marina SpA to the correspondent research Line.

At the same time, the professional will supervise the development of the research Line "Technologies at Sea" and proposed activities.

A new year is starting and students are already taking their first courses in Liège.

This is the rescue boat contest, in which they have about 3 hours to design a paper rescue boat which will be launched from a few meters into a basin.

The eggs must be intact after a minute of successfully floating on the water.

Meet Sara from Colombia, a PHD student in Applied Sciences at ULiege

After a stay at the University of Liege during her Master, thanks to the Erasmus+ program, Sara came back at ULiege for her PHD in Applied Sciences.

A brief presentation was given at the "The sea and renewable energies 2018" in Seville (Spain).

3 EMShip Graduated from the 6th cohort working at BV Antwerp 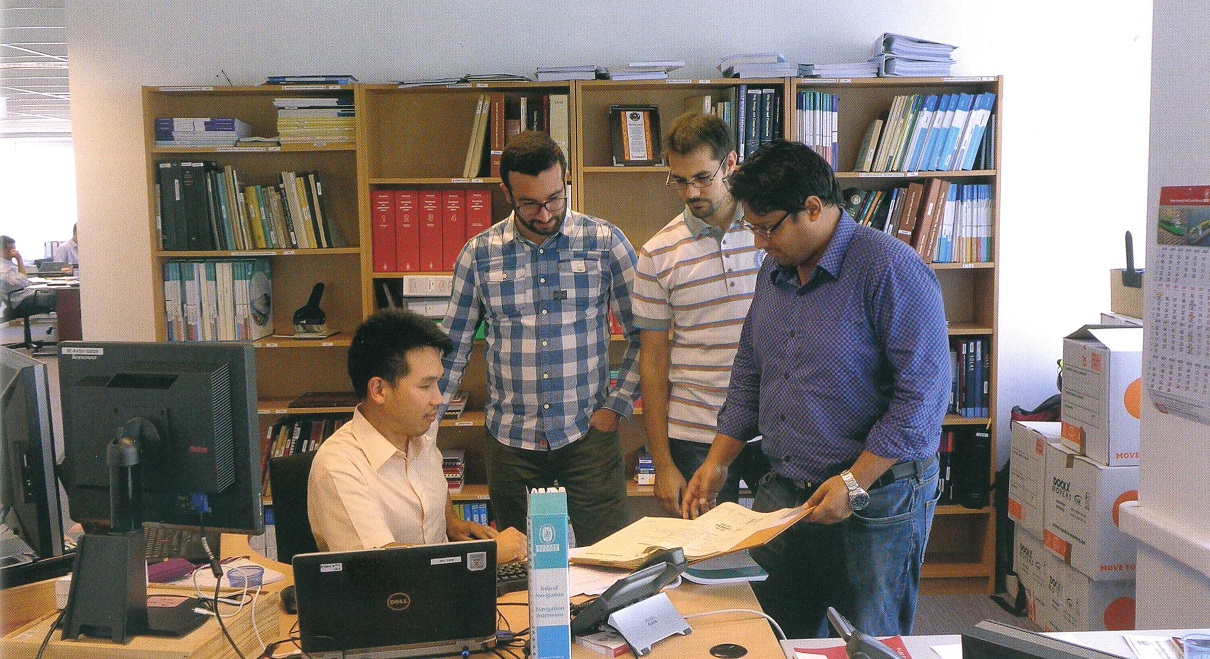 EMSHIP from Helio Bailly on Vimeo. 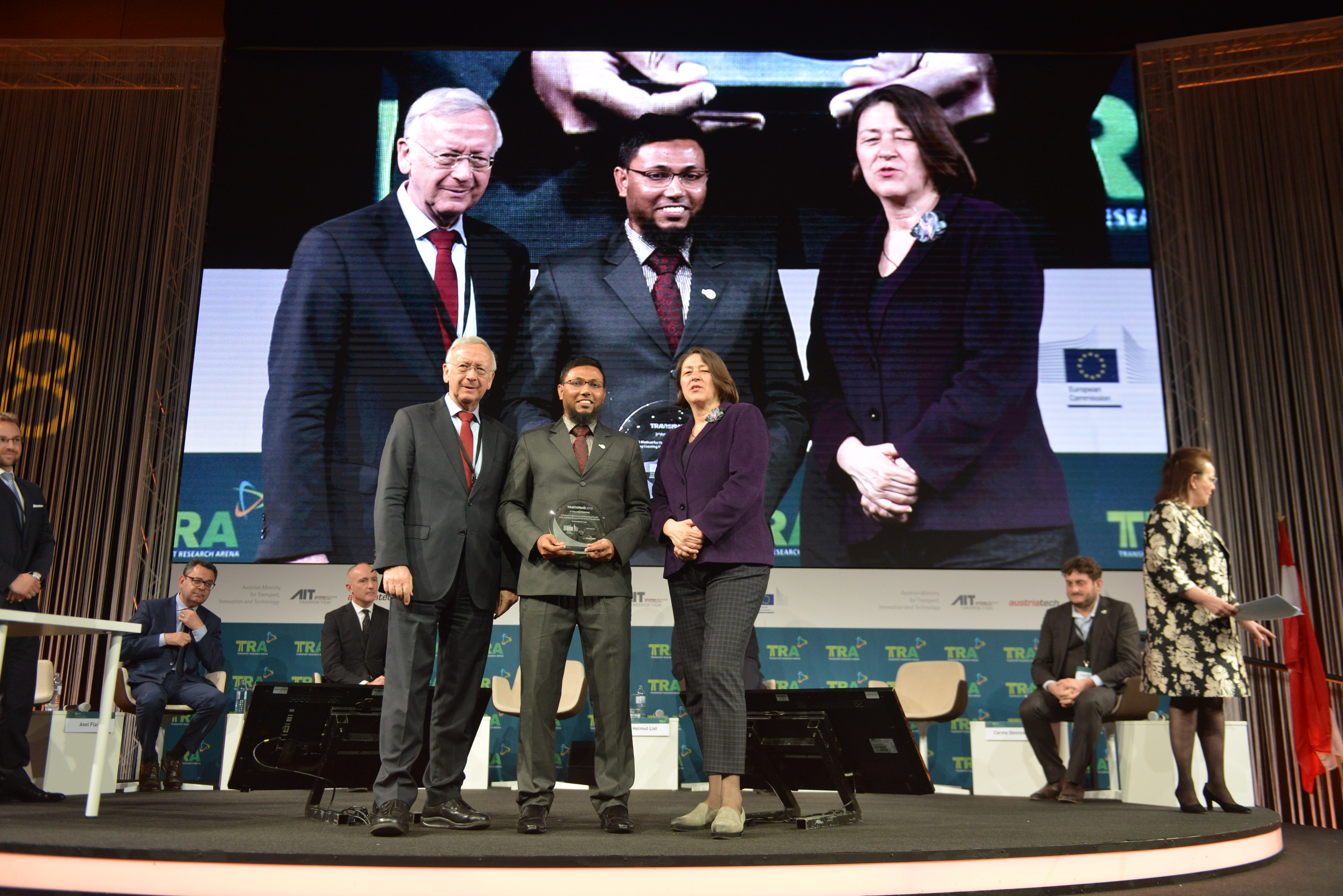 "A Method for Optimizing Cruising Speed Profile using Coasting Phenomena for an Eco-Friendly Ship" won the 3rd Prize in waterborne category at the TraVision competition. The award was given on 16th April at the Tra Conference in Vienna. 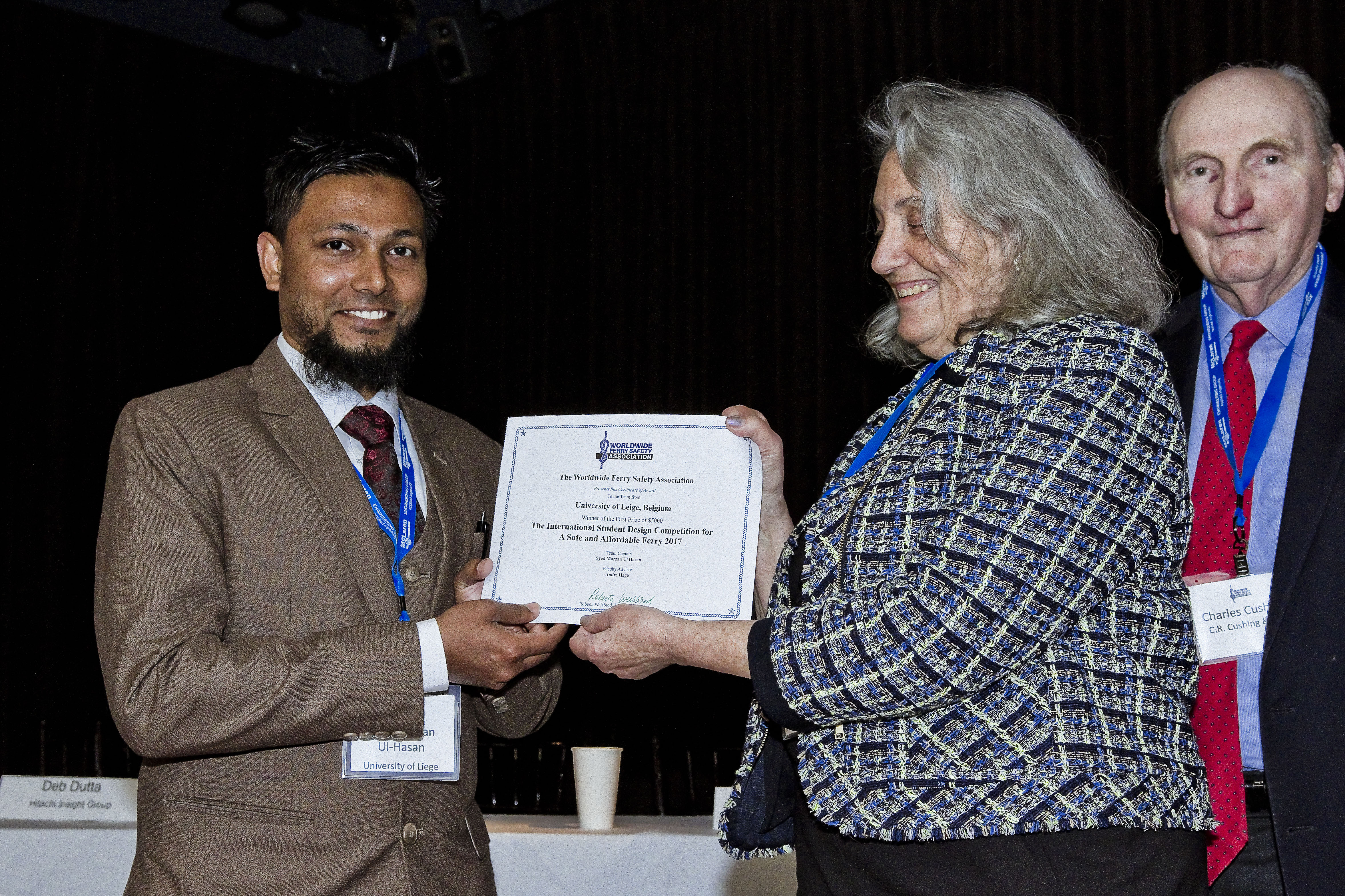 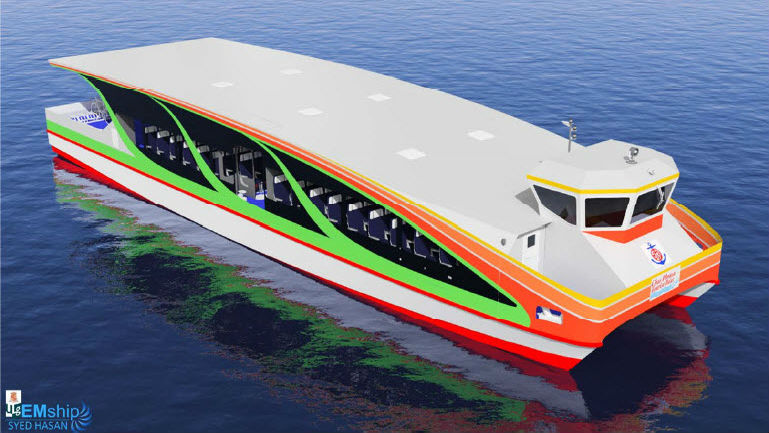 New York: April 20, 2017- The Worldwide Ferry Safety Association (WFSA) ( www.ferrysafety.org ) will be presenting awards to the winners of its Ferry Design Competition at its upcoming Ferry Safety & Technology Conference.

Nine student teams from around the world submitted their ideas for design of a safe affordable ferry for the Chao Phraya River in Bangkok. They designed a 200 passenger ferry that could become a new addition to 59-vessel fleet of the Chao Phraya River Express Boat Company, which currently has 38 landings along its 30 km route. The Chao Phraya River Express Boat company has maximized the value of its landings to passengers by creating intermodal links and adding shopping and recreational opportunities. The ferries are also a tourist attraction as they ply the storied river past magnificent gilded temples... 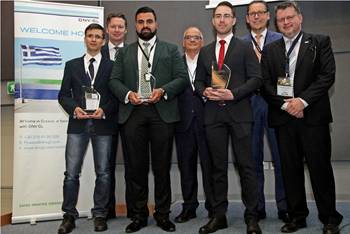 DNV GL has honoured an EMSHIP Graduate for his scientific research with the DNV GL Award for Young Professionals. Presented by DNV GL – Maritime CEO Knut Ørbeck-Nilssen at the Posidonia trade fair, the award is designed to find innovative ideas for increasing safety, efficiency and sustainability in shipping. As well as seeking out the best new research, the award aims to support young professionals in the maritime field. Overall, 24 people took part in the competition.


The prize in the category “Safer” went to Aleksei Alekseev, EMSHIP Graduate, Erasmus Mundus Masters programme in Advanced Ship Design, which is jointly conducted by the universities of LIege, Nantes and Rostock. Alekseev won the award for his master thesis “Numerical Simulation of Ice Ridge Breaking”, which created a tool capable of simulating the behaviour of vessels operating in ridge ice. The tool could also be expanded to model ships in various other fragmented ice formations. Alekseev employs the discrete element method technique, where a multitude of individual, unconnected ice blocks can be simulated along with the water to derive pile-ups, forces on the vessel and the required thrust. Simulation tools such as the one developed by Alekseev enable technical experts to predict the performance of ships and offshore structures in ice. Such forecasts can play a valuable role in enhancing the safety of arctic operations. 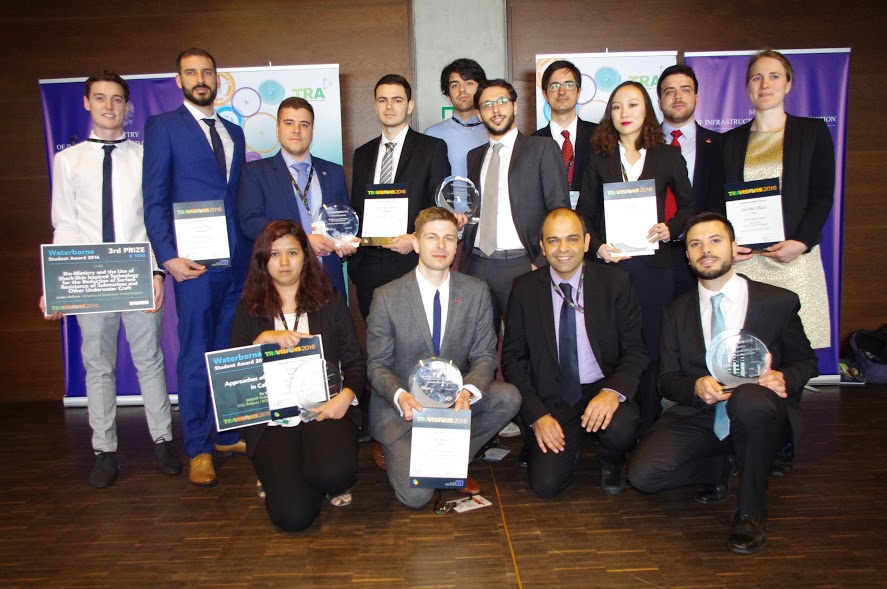 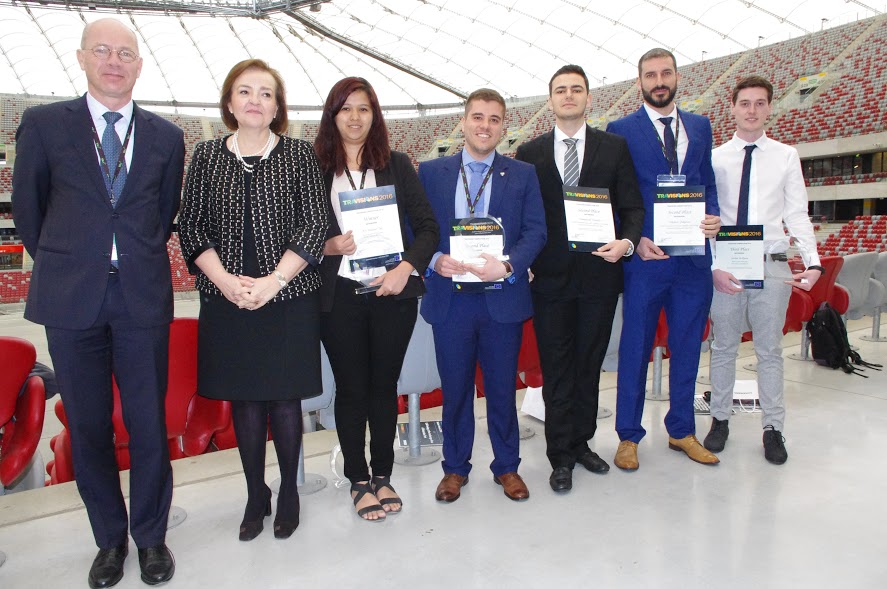 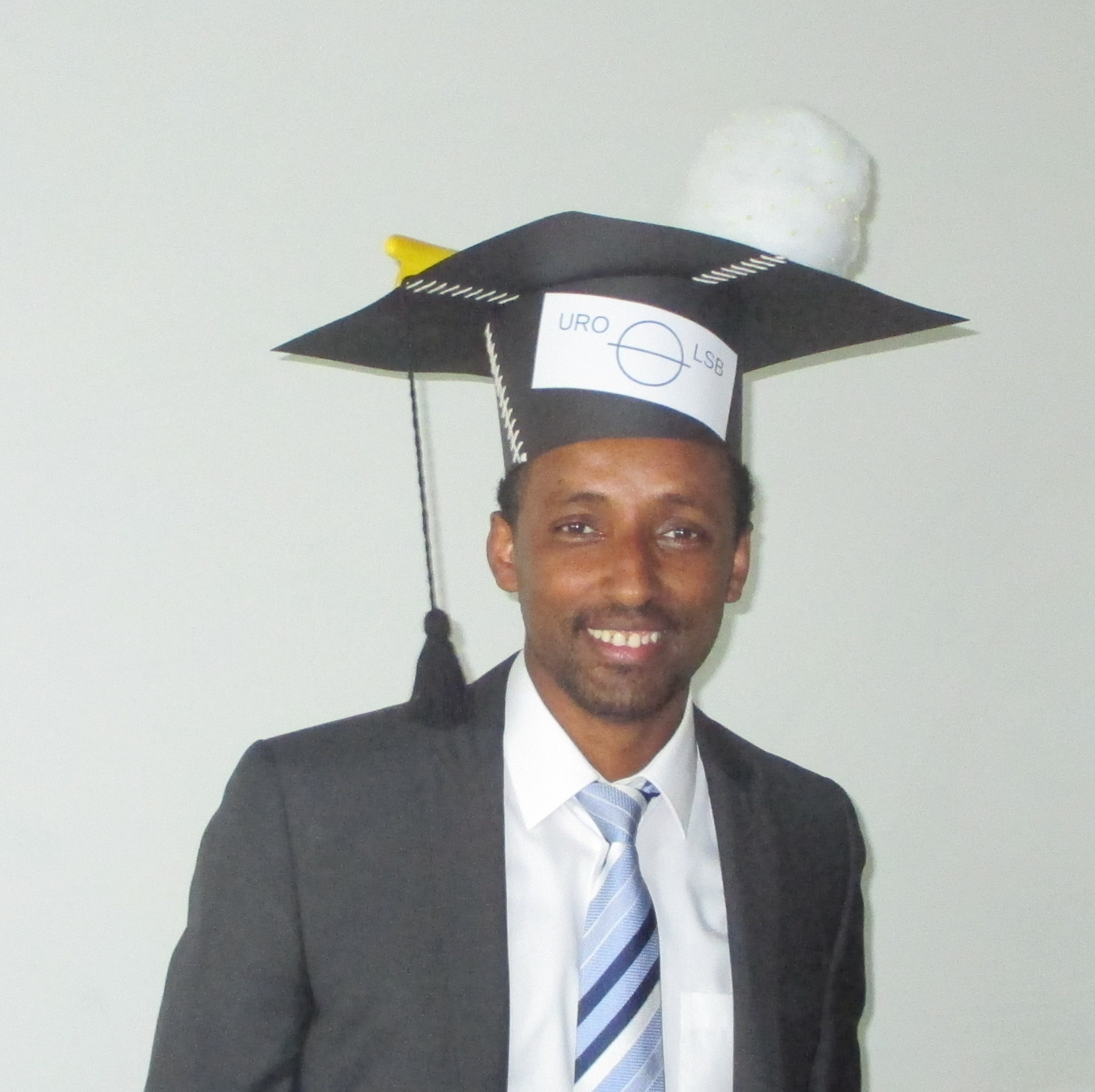 Brief Summary of the Thesis by Desta